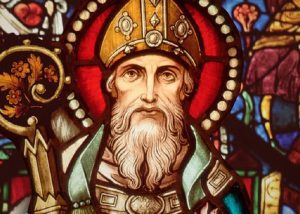 Saint Augustine of Hippo was one of the most distinguished theologians in the history of the Church and may have exercised more influence on the shape and direction of doctrines of faith than any other theologian including Saint Thomas Aquinas.

He was born in 354 to Saint Monica, a Christian, and Patricius, a pa­gan until just before his death. He was registered as a catechumen but not baptized since Baptism at the time was delayed until adulthood. His formal education as a lawyer and rhetorician took place in the North African city of Carthage, a major metropolitan city of the Roman Empire. He entered into a relationship with a woman who bore him a son, and at age 22, started his own school of rhetoric and grammar. At age 29, he and his companion and their son travelled to Rome so he could further his career. He was appointed professor of rhetoric in Milan, the seat of the imperial court.

While in Milan, Augustine became captivated by the eloquent sermons of Saint Ambrose, and after a long interior conflict, vividly described in his Con­fessions, he was baptized at the Easter Vigil. Augustine was 33 years old.

Augustine’s mother, Monica, had followed him to Rome and then to Milan while his companion, after having lived with him for fifteen years, returned to Af­rica. Augustine’s mother died in 387 and his son passed away in 390 at age 17.

During a visit to the African port city of Hippo in 391, Augustine was rec­ognized and acclaimed by the local Christian community and was practically compelled to accept ordination. In 395 he became their bishop and remained bishop of Hippo for the rest of his life, preaching, writing, administering the sacraments and engaging in a broad range of other pastoral activities. He was especially devoted to the care and relief of the poor. He presided over synods and councils, and adjudicated civil as well as ecclesiastical cases.

A prolific writer, Saint Augustine produced a number of major works. They include not only the Confessions, arguably one of the greatest books in West­ern literature, but also his sermons on the Gospels, Epistles, and Psalms, the De Trinitate (“On the Trinity”), and the De Civitate Dei (“On the City of God”). His writings were especially influential in the development of the doctrines of creation, grace, the sacraments and the Church. On Christian stewardship, he insisted: “Find out how much God has given you and from it take what you need; the rest is needed by others.”

Augustine died on August 29, 430. He is one of the four original West­ern Doctors of the Church along with Saints Ambrose, Jerome and Gregory the Great.

END_OF_DOCUMENT_TOKEN_TO_BE_REPLACED

Saint Anthony of Padua is one the most beloved and admired saints in the Church. A Franciscan friar and a Doctor of the Church, he is considered one of the greatest preachers in the history of Christianity. Anthony was born on the Feast of the Assumption in Lisbon, Portugal, in 1195 to a wealthy and …