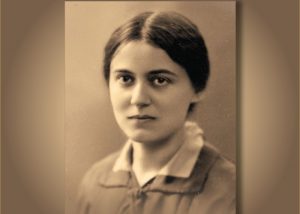 In 1921 Edith had a conversion experience. At age 30, she began reading the autobiography of St. Teresa of Avila in a friend’s library and couldn’t put it down. “This is the truth!” she exclaimed. She converted to Catholicism and was baptized on New Year’s Day, 1922.

Edith soon became well regarded as a Catholic philosopher and author. She left her university appointment as Husserl’s assistant and took a position teaching at a Dominican college for women teachers in Speyer, Germany. While there, she studied the philosophy of St. Thomas Aquinas and published the first German translation of his treatise The Truth. She also lectured widely to Catholic women’s groups throughout Europe.

Edith was passionate about her teaching, writing and lectures, but she yearned for a deeper relationship with God. In 1933 she entered religious formation in the Carmelite community at Cologne, Germany and made her final vows on Easter Sunday 1935, taking the name Teresa Benedicta of the Cross.

As the persecution of Jews in Germany intensified in the late 30s, Sister Teresa Benedicta was taken out of the country. On New Year’s Eve 1938, she secretly crossed the border into the Netherlands where she was welcomed by the Carmelite community at Echt. There she would write her final book, The Science of the Cross, a study of the spirituality of St. John of the Cross.

The German Army invaded the Netherlands in 1940 and Sister Teresa’s situation would again become perilous. She and her sister Rosa, also a Catholic convert, were eventually arrested and transported by cattle train to Auschwitz, where they perished in a gas chamber on August 9, 1942.

END_OF_DOCUMENT_TOKEN_TO_BE_REPLACED

Saint Albert the Great was a 13th-century German Dominican priest, considered one of the most extraordinary men of his age alongside Peter Lombard, Roger Bacon and Saint Thomas Aquinas. His stewardship of the intellectual life, his students and our life of faith is profound. Born in 1200, near Ulm, Albert was the eldest son of …