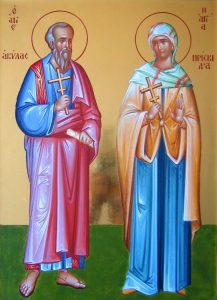 Prisca and Aquila were a prominent married couple who were missionaries, established churches and played an active role in the evangelizing ministry of Saint Paul. They are mentioned six times in four different texts of the New Testament.

Prisca and Aquila were of Jewish heritage and two of the earliest known Christian converts who lived in Rome. They were forced to leave Italy for a short time because of Emperor Claudius’ edict in the year 49 C.E., prohibiting Jews from living in Rome.

Paul visited Prisca and Aquila in Corinth and discovered they were tentmakers like himself, so he stayed with them and they worked together (Acts 18:1-3). When Paul left Corinth, Prisca and Aquila left with him but stopped at Ephesus while he traveled on to Syria.

In Ephesus the couple gave catechetical instruction to Apollos, a Jew from Alexandria (Acts 18:18-19, 24-26). They returned to Rome when the expulsion was eventually lifted and Paul sent them greetings there, referring to them with great affection: “My greetings to Prisca and Aquila, my fellow workers in Christ Jesus, who risked their own necks to save my life; to them, thanks not only from me, but from all the churches among the gentiles …” (Rom.16:3-4).

Paul then added: “…and my greeting to the church at their house” (Rom.16:4), a reminder that Christians in the New Testament era gathered for the Eucharistic celebration in private homes and not in separate church buildings.

The Roman Martyrology states that Prisca and Aquila died in Asia Minor, but some church historians believe the tradition that the couple were martyred in Rome, in part, because of the existence of the Church of St. Prisca on Aventine Hill, the southernmost of Rome’s seven hills. The church is believed by many archeologists to be the site of the house of Prisca and Aquila. Their feast day is July 8. 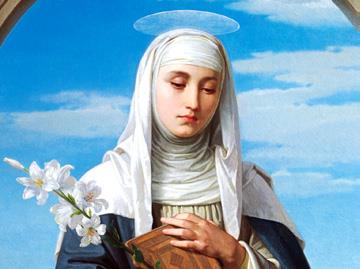 Stewardship Saint for April: Saint Catherine of Siena, Doctor of the Church