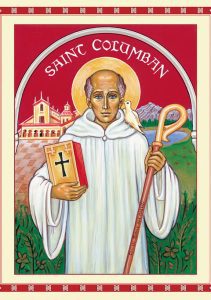 The life of Saint Columban (also referred to as Columbanus) reveals
a man who exercised remarkable stewardship over his life of faith and his gifts for evangelizing.

He was born into a noble family in West Leinster, Ireland, in about
543; a time when the great Celtic monasteries were being established in Ireland. He received a classical education and as a young man became attracted to the monastic practice of integrating prayer, manual labor and study of scriptures into one’s daily life. He entered the renowned monastery of Bangor and for many years embraced a life of asceticism.

In mid-life, he believed he was being called by God to preach the
Gospel in foreign countries. He responded to this call, becoming one
of the great Irish missionary saints. He established a number of monasteries in present-day France and Italy including the famous monastic community at Luxeuil in France, where he served as abbot for more than 20 years.

At age 70 he resumed his missionary journey, traveling to what
is now Switzerland and then, over the Alps to Lombardy where he finally settled on gifted land in Bobbio. Here he founded the monastery that has the greatest claim to him. He remained there until his death on November 23, 615. His followers continued to preach the Gospel in France, Germany, Switzerland and Italy, and are credited with founding over 100 monasteries.

Saint Columban possessed gifts well-suited for evangelizing.
He invariably attracted large crowds who were struck by his
enthusiasm for the Gospel, his persuasiveness and humility. He
and his monks led the simplest of lives, and their meals oftentimes
consisted of nothing more than forest vegetation, herbs and berries.
He developed a monastic rule and promoted penitential practices which emphasized private confession to a priest and doing penance. He also wrote a commentary on the Psalms.

In 2004, a portion of Saint Columban’s journey from Ireland to Italy was highlighted in a travel memoir entitled, The Accidental Pilgrim: Travels with a Celtic Saint. The author wrote about his experience of retracing the missionary journey of St. Columban on bicycle.

END_OF_DOCUMENT_TOKEN_TO_BE_REPLACED 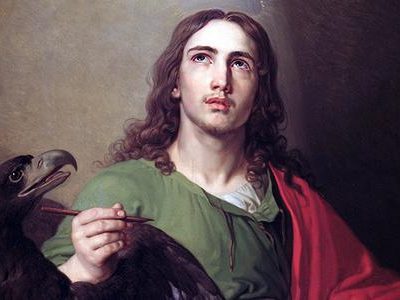