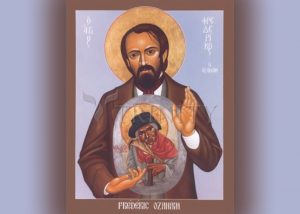 During the 1997 World Youth Day celebrations in Paris, Saint John Paul II beatified Antoine Frederic Ozanam in Notre Dame Cathedral and proclaimed him to be a model for all Catholic laity. “No better model could be given to the youth of the world than this young man … ‘Show us your works!’”

Blessed Antoine Frédéric Ozanam was a French Catholic scholar and defender of the Catholic faith at a time when it underwent severe challenges in early 19th century France. He also founded the Catholic association of laity dedicated to serving the poor, which came to be known as the Society of St. Vincent de Paul.

Frederic was born in Milan, Italy, in 1813, the fifth of 14 children. Showing academic promise at an early age, his parents encouraged him to study. He was interested in law, languages and philosophy, and in 1831 went to the renowned Parisian university, the Sorbonne, to study law. It was here that he encountered hostility to Catholicism. He published a short work responding to this hostility that attracted the attention of French Catholic writers and politicians.

Frederic’s writings emphasized the important social contributions of the Church, but a conversation with another student disturbed him: “Frederic, I accept that the Church may have done things for people in the past but what are you doing now? Show us your works!” Those words stung the young Frederic so much that he decided to work with the poor. In 1833, with seven university companions, he laid the foundations of the Society of St. Vincent de Paul honoring the great saint who in another time had also ministered to the poor of the city of Paris. He was 20 years old.

Frederic earned a doctor of laws in 1836 and a doctorate in letters in 1839. He became a professor at the university and, in time, chair of foreign languages. His lectures at the Sorbonne were among the most popular as students flocked to hear this young, vibrant speaker.

In 1841 Frederic married, had one daughter, and is said to have embraced a youthful enthusiasm for his marriage and his parenting. Each month he would observe the anniversary of his wedding with a thoughtfully chosen gift, however small. Frederic brought that same domestic love and attention to the growing Society which spread throughout France and other countries within a relatively short time.

He gained a reputation as the leading historical and literary critic in the “new” Catholic movement in France, and his popular writings in the late 1840s won him a number of French writing awards. He was hailed as a brilliant promoter of the Catholic faith. Frederic died of tuberculosis at age 40 on September 8, 1853. Today the Society numbers nearly a million members in 142 countries. Frederic’s feast day is September 9.

END_OF_DOCUMENT_TOKEN_TO_BE_REPLACED

Neumann, a small individual at 5’2”, arrived in Manhattan in June 1836 and was ordained three weeks later for the Diocese of New York. His first assignment was to provide pastoral care for a German-speaking immigrant community whose members were clearing forests for a settlement near Niagara Falls. After four years of working alone, Neumann …